Fredericton – David Coon, MLA for Fredericton South and Leader of the Green Party of New Brunswick issued the following statement in recognition of International Women’s Day on Tuesday, March 8:

“For the first time in the history of International Women’s Day, our federal cabinet contains the same number of women as men.  This sends an important message to young women and girls, that women and men, together, are making the important decisions about the future of our country, not the least of which are those needed to eliminate poverty. 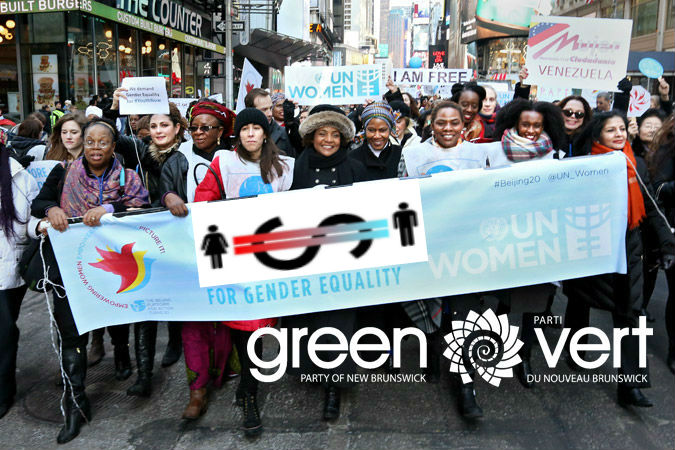 Urgent decisions are needed to end the feminization of poverty.  Women, both single mothers and seniors, disproportionately make up the poor in New Brunswick and Canada.  Twenty one percent of single mothers in Canada are raising their children in poverty. Forty three percent of those on the waiting list for subsidized housing in New Brunswick are largely women over 65.

Social Development Minister Cathy Rogers has a real opportunity to help alleviate poverty for women in our province by relentlessly pursuing the federal government to ensure that it provides New Brunswick with a fair share of its funding for affordable housing.

I also encourage the Minister to pursue the interest expressed by the federal government in exploring a basic income guarantee. New Brunswick would be the perfect province in which to pilot this approach to alleviating poverty. A basic income guarantee, known as ‘Mincome’, was piloted in Dauphin, Manitoba in the 1980s, where it successfully helped women escape from poverty .

With a Prime Minister, who asserts he is a feminist and has committed to assisting provinces in solving real problems, New Brunswick needs to be engaged and persistent in championing the interests of women with Ottawa.”