A few dozen people turned out at the legislature Wednesday to protest the use of glyphosate and other herbicides in the province.

They are part of a new group called Stop Spraying New Brunswick, made up of hunters, environmentalists, and others opposed to spraying in New Brunswick forests.

Matthieu Vienneau of Kedgwick, says a recent report by The International Agency for Research on Cancer, a branch of the World Health Organization, deeming glyphosate "probably carcinogenic to humans" was one of the reasons the group was started.

"Between that and all the deer herds that are dying," said Vienneau. "I'm a New Brunswick hunter, we've had this problem for years."

Glyphosate is a herbicide used widely in the province as a defoliant by a number of companies, including NB Power and J.D. Irving Ltd.

It is currently under review by the office of the Chief Medical Officer of Health, as well as being re-evaluated by Health Canada.

The group gathered 1,100 names on a petition, mostly in the Kedgwick area, to ban pesticide spraying. They say their aim is to get one-tenth of the province's population to sign it. 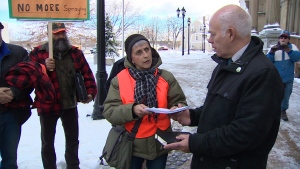 "Our goal is to ban this, we gotta gather 75,000 names to make a real impact on this," said Vienneau.

The group presented Green Party leader David Coon with the petition, which he will table. Coon told the group they have his complete support, and he'll do whatever he can in the legislature.