Despite a huge increase in spending on public transportation announced in Tuesday's federal budget, some provinces say they aren't being treated fairly by the Trudeau government.

The Liberals came through on their campaign promise to greatly increase spending on public transportation, by announcing an injection of $3.5 billion dollars over three years for municipalities.

It's not the money that has some upset though, it's the formula.

The money will be doled out based on ridership of existing public transportation systems, not by population. 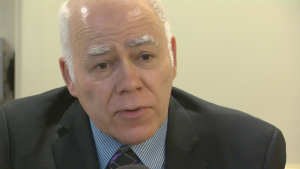 By basing the formula on ridership, Coon said it immediately hurts the places where transit needs the most help to grow.

"You absolutely are punishing transit systems that are struggling," he said. "You're, in a way, punishing provinces, New Brunswick particularly. One of the reasons we stand out here: New Brunswick, unlike every other province, never directly invested money from its own budget into public transit."

It's a relatively simple problem to fix, he said.

"Right now we need to provide a service that is more convenient to riders, and to do that, it's just a question of money," Coon said. "This is a source of money that everyone's been counting on, it just needs to be fairly distributed."

"Absolutely. I've been trying to demonstrate this in Fredericton, by pitching a pilot project to city council here," he explained. "To run a bus up and down (Regent) street every 15 minutes, just to demonstrate that you would increase ridership dramatically.... So it seems like a no-brainer that if you build the system, or redesign a system that's as convenient as possible, that provides the capacity that's needed, that enhances the service, then people are going to use it."

Coon believes it's not too late to get Ottawa to listen.

"We need our champions on this, and that really is our Members of Parliament, and the relevant provincial ministers."