The bill would have required the provincial government to give preference to local food providers when supplying nursing homes, schools and hospitals.Several farmers left their fields to go to Fredericton to show their support for the bill, including Ted Wiggans, New Brunswick president for the National Farmers Union (NFU). 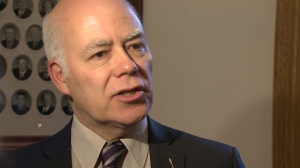 "What it means is that it's going to be more difficult for the consumer to know where their food is coming from and for consumers who do want to buy local products. It's very hard to identify that right now. It says 'local,' but you don't know what that means. It could be from across the border, or it could be from across the country, you don't know."

Wiggans says the NFU will continue working toward getting some kind of legislature in place and hopes Coon's bill at least generated more discussion about local food. 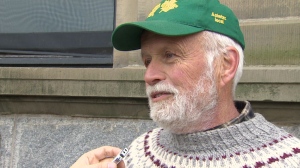 Ted Wiggans, New Brunswick president of the National Farmers Union, says he will continue working to get some kind of local food legislation in place. (CBC)

Coon criticized the government's failure to consult on the bill."The way this system is supposed to work is that bills that require consultation should got to a committee. Invite the public in, invite interest groups in, invite experts in to carry out that consultation and improve the bill based on that input, if needed," he said.

"And secondly, the bill is designed, the way it's written, entirely to build consultation into developing the details because it's not a prescriptive bill."

The bill would also have included better labelling for local food and healthy food education for schools.

"Also, as we step down the road, is there a tourism element to this?"