“Everywhere I go in New Brunswick, I see demand for quality home care increasing, but our senior citizens and their family members are hitting a wall of inadequacy in current services — the system designed by the Conservative and the Liberal parties in this province just isn’t working, not for our elders, not for New Brunswickers with disabilities, and not for the workers who provide essential services for people in their homes,” says Coon.

“The Green Party knows that a flexible, multi-faceted system that matches up needs with care is what we need, and that cannot be delivered by a one size fits all profit driven model,” says Coon. “That old fashioned approach leads to lower in-home care standards and drives wages for the women and men who provide care down to unacceptable levels,” he says.

The commitment from the Green Party platform includes:

The Green Party leader says that 10% shift in consumer spending on imported goods and services to New Brunswick-made products would create 14,000 jobs and add $1.8 billion to the provincial economy annually.

“The Green Party platform contains a practical, achievable plan that will strengthen local economies in both our rural communities and our cities,” says Coon, “a plan that stops the flow of government subsidies to a handful of large corporations.”

Highlights of the Green Party economic development commitments include:

Coon today released the Green Party commitments to address poverty, saying that inadequate incomes are all too common in New Brunswick, where about 100,000 people live below the poverty line.

“Louis J. Robichaud commissioned a task force on social development that recommended a basic income guarantee for New Brunswick back in 1970. The Tory government that replaced his, scrapped the recommendation and the Liberals haven’t picked it up since,” said Coon. “Today the Greens build on a proud history of progressive solutions to the challenges we face in New Brunswick.”

“New Brunswick will thrive if everyone has the means to fully participate in the economic, social and political life of their cities, towns and rural communities,” said Coon.

The Green Party platform commitments to address poverty include:

“We’ve all witnessed the decline in our public health care system, whether it’s by personally experiencing the over-crowded emergency rooms or long wait times to get a family doctor or extra care for our aging parents and grandparents. Tinkering around the edges of health care reform is not working. If we start to rebuild the system, taking a community-centered focus with family health teams in the lead, we will get the expert care our family members both need and deserve.”

The full platform can be found here: http://www.greenpartynb.ca/2018_platform

Subject: Green party response on the question of a French language leaders’ debate

It is with disappointment that I learned yesterday that Radio Canada Acadie will ultimately not hold a leaders’ debate in French due to a conflict between Mr. Higgs of the Progressive Conservative party and Mr. Gallant of the Liberal party.

This conflict over the format of the televised French debate – an essential media event in any election campaign – unfairly deprives a third of the population of New Brunswick of an essential source of political information, essential to our democratic process.

Even as we, in New Brunswick, are on the eve of celebrating the 50th anniversary of the Official Languages Act, passed in 1969 by Louis J. Robichaud, we cannot forget article 16.1 of the Canadian Charter of Rights and Freedoms. We therefore recognise the equality of status, rights, and privileges for both the French and English linguistic communities of New Brunswick.

Respect for and protection of New Brunswick’s two Official Languages and its French and English linguistic communities is a defining characteristic of New Brunswick. Without a French debate it is the Acadian and francophone communities with their own issues that are being ignored.

The Green party of New Brunswick is ready to work with the other parties for the well-being of all communities in our province. We are dedicated to respect for and the protection of our two official languages.

We hope all the parties and their leaders overcome this partisanship and demonstrate respect for real equality between the two linguistic communities.

I am hoping for a solution to this problem and an invitation to a leader’s debate in French.

David Coon
Leader of the Green Party of New Brunswcick

Small business operators, a successful artist, and an internationally recognized journalist are among the latest candidates representing the Green Party of New Brunswick in the next general election.

"People ask me all the time about whether more Greens will be elected on September 24th, and I like nothing better than describing the excellent candidates we have in every corner of our province," said Green Party leader David Coon. "Today we are announcing eight more, bringing our total number of candidates to-date to a total of 31. There is a tremendous appetite to vote for an alternative to the Liberals and PCs, so I know that New Brunswickers will be sending Green MLAs in good numbers to the Legislative Assembly on September 24th."

Coon has every reason to be excited. Included in the latest group of Greens entering the election are a wide variety of capable, passionate candidates.

Former journalist Doug James is best known for his work as a foreign correspondent for CNN, where he covered the first Gulf War, the Palestinian Intifada and the fall of the Berlin Wall. He will represent the Greens in Saint John-Lancaster.

Tamara White has, for the last seven years, managed an award-winning architectural firm based in Fredericton. She has led to its growth by practicing values of hard work, fair and equitable wages, effective communication and fiscal responsibility, while at the same time also supporting other local businesses. She will represent the Greens in Fredericton North.

Former teacher Louann Savage is elevating her passion for all things Miramichi by running in that riding.

Bruce Dryer, who holds a degree in biology from UNBSJ – focussing on marine and environmental biology – will carry the Green Banner in Kings-Centre. Bruce has been interested and actively involved in politics and political issues most of his life and actively volunteered in campaigns the past three provincial elections.

Edmundston-Centre will see a familiar face represent the Greens, as she currently sits as a councilor for Lake Baker Village, elected in 2016. Sophie Vaillancourt is part of several environmental and preventive health care committees in her area.
Mural artist Fred Harrison, whose 20-year career includes painting some of the famous murals in Sussex, is the Green Party candidate for Sussex-Fundy-St. Martins.

In Moncton East, Matthew Ian Clark, a certified accounting technician, will represent the Greens.
Landscape business owner Mario Comeau is the Green candidate in Restigouche-Chaleur. Mario currently serves on the local service district for the Parish of Beresford. 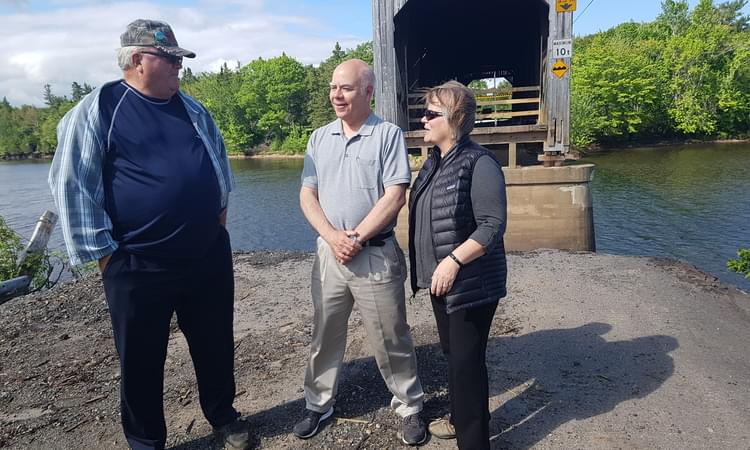 Sue Rickards will be the Green candidate for the riding of Carleton-York in the upcoming election.  She was acclaimed by the local Green party members on June 4th at the Dumfries Maple.
''Sue's long experience working in communities in her riding means she can get right to work for the people of Carleton-York the day after the election. She gets things done and she is passionate about seeing a renaissance in farming in her constituency to give local youth a future at home on the land,” said David Coon, leader of the Green party and MLA for Fredericton South. Sue had this to say about her nomination: "The Green Party is action-oriented.   Carleton-York has great people and solid communities;  we can build on that potential for a sustainable economy and healthy lifestyles.   It’s time for us to stop drifting and start paddling." 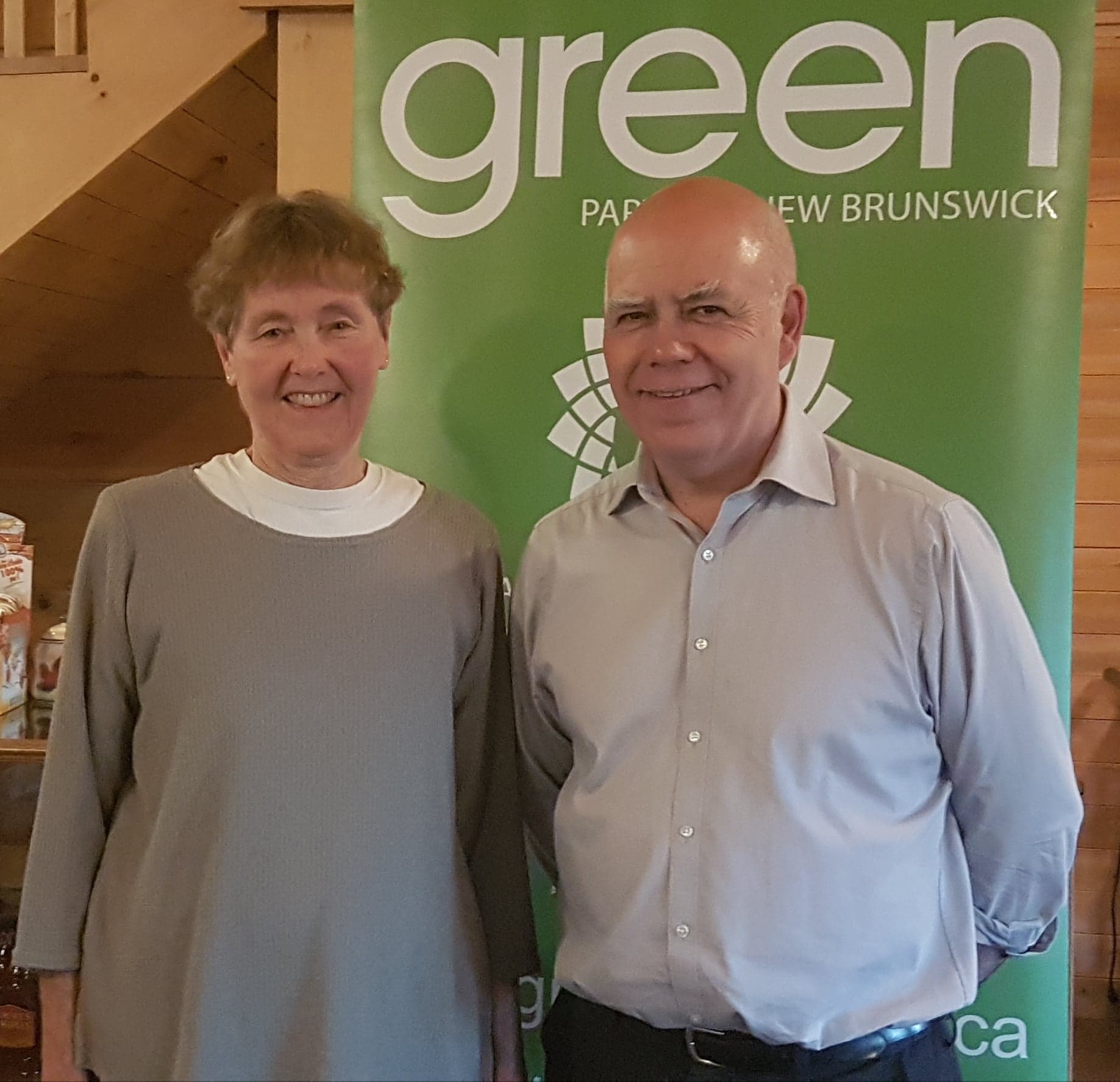