Green Party Leader David Coon has failed in a bid to cancel the wood supply contracts between the provincial government and several forestry companies. 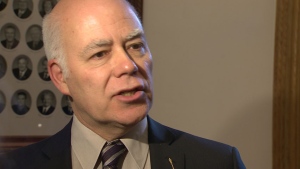 Liberal and Progressive Conservative members joined forces on Wednesday to defeat Coon's Bill 13: An Act to Return to the Crown Certain Rights Relating to Wood Supply and Forest Management.

Coon called it a "sad day for New Brunswick forests."

"This government has favoured industry over reclaiming its authority for managing Crown lands and its ability to uphold its treaty obligations to First Nations," he said in a statement.

Gallant's Liberals criticized the plan before the provincial election, demanding that the Progressive Conservative government release scientific data that was the basis for higher logging quotas.

The Liberals had also promised to make more information about the contracts public, but after they won the election they said they would have to honour the agreements.

Coon says he won't stop fighting. "I will continue to stand up in defence of the forests, the people that depend on them for their livelihood and the indigenous peoples that never surrendered their title over them," he said.