The New Brunswick Coalition for Pay Equity is calling on the Gallant government to reverse its decision to privatize hospital support services, saying the majority of the targeted jobs are held by women. 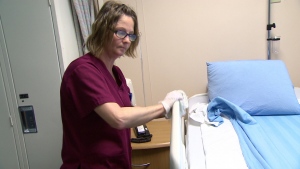 The New Brunswick Coalition for Pay Equity says most of the jobs in the three hospital support services targeted for privatization are held by women. (CBC)

"We are deeply concerned about the impact that privatization of these services could have on pay equity," Vallie Stearns said in a statement.

Nearly 90 per cent of employees in hospital food services are women, about 80 per cent in environmental services, and 40 per cent of porters, according to the coalition.

"Women should not bear the burden of deficit reduction," said Stearns.

"Cuts [that] will come as a result of privatizing the management of those services will fall disproportionately on women," he said.

"Sixty-five per cent or more of people working in education services — teachers and administration — are women and we're seeing 302 job losses there, which disproportionately fall on women, so it just continues a pace."

Carr said reducing the subsidy to the owners of for-profit daycares will force them to close or increase fees, thereby decreasing access to daycare services.

Coon contends rather than targeting women, the government should increase the corporate tax rate and make businesses pay more.

He claims a tax rate equal to Nova Scotia's would generate $68 million in new revenue.