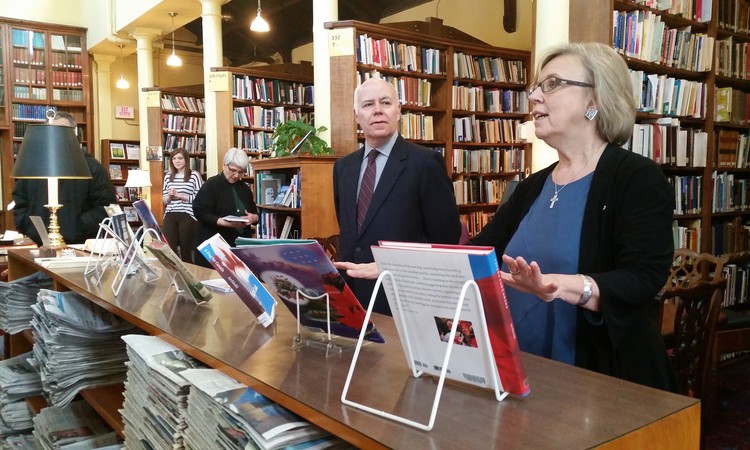 FREDERICTON • National Green Party Leader Elizabeth May says Canada needs a national energy policy and climate plan – one that would halt the $12-billion Energy East pipeline project before a single section of steel is anchored above the ground.

May is in New Brunswick Monday, her fourth visit to the province in the space of about a year, promoting her national vision and local candidates who will run for the party in the federal election later this year.

She told reporters in the press gallery that TransCanada's big pipeline project was a dead end.

"There is no point, not economically or environmentally, in having pipelines to bring raw bitumen to tidewater," she said, with New Brunswick Green party David Coon beside her. "We both oppose Energy East and are extremely concerned with the failure of the National Energy Board process."

May said Canada is under a tight deadline for reducing greenhouse gases because it will be participating in an international climate conference in Paris later this year that will try to forge a new agreement to compel countries to halt and reverse the warming of the planet.

An agreement is supposed to be adopted in December 2015, with countries taking preventative measures by 2020. Most scientists say too many greenhouse gases caused by the burning of fossil fuels like oil are changing the world's climate, something that could have catastrophic consequences.

All 49 members of New Brunswick's legislative assembly except one – Coon – support the pipeline project that would transport 1.1 million barrels of crude daily more than 4,600 kilometres across six provinces to refineries and export terminals in Quebec and New Brunswick.

The governing Liberals and opposition Tories both say the province needs the pipeline to create jobs and help Alberta and Saskatchewan get their crude to local and global markets.